This is the start of our blog about "YELLOWDREAM" a 1978 Leisure 27 sailing yacht.
We start this blog because after reading some nice blogs of other sailers we also wanted to let other sailers share our experiences.

But first let us introduce ourselves: "We" are my wife Ann and Ad . both 62 years old and last year (at least myself) retired from a busy job as an process engineer.


After having owned Yellow Bird , a Leisure 23 for 11 years , we decided that something a bit bigger should come in place to make a more extensive cruising possible. We did sail about 15000 Nautical miles with Yellow Bird , mainly to Germany , Danmark , Sweden and Norway and one detour to England France and Belgium in 2006.


In september 2008 I discovered a Leisure 27 called "Bagheera" . We had been looking at something like that for some time but it took some time to find a suitable and affordable boat because I preferred a bilgekeel or centreplate to get acces to my home berth which is quite shallow ( Lake "Schildmeer"in northern Holland 53°16'6.78"N , 6°50'15.58"O) and be able to sail the "Waddenzee" .

Coincidentally "Bagheera" had exactly the same yellow color as Yellow Bird so changing the name into something similar seemed quite naturally. 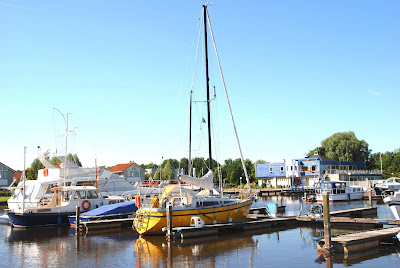 After doing a lot of improvements to our new boat such as , installing a wheelpilot, bigger engine (the bagheera originally still was equipped with the original 7.5 Hp Md5A which was much too small), mastlowering device to sail the Dutch and German inland waterways, chartplotter, GMDS VHF , log/sounder combination , windpilot, solar panel and much more , the YELLOWDREAM now is ready for her first "big trip" which is expected to bring her to Scandinavia , especially Norway (off course if the weather permits it!).
The cruise is bound to start in about two weeks from now and will first bring us to the nearby Delfzijl which will be the departure port for the first leg to the German Island of Norderney.

Until then!
Ad
Posted by YELLOW DREAM at 13:50 Geen opmerkingen: